Last September I gave a talk at EuroBSDcon in Paris. It was about the VPN setup for connecting the branch offices of my employer.
https://2017.eurobsdcon.org/talk-speakers/#RemiLocherer

It was not my first EuroBSDcon but the first time I delivered a talk! I feared that only few people will show up at to my talk since Michael W. Lucas had his talk at the same time and also covered an OpenBSD topic. But the room was full and my talk was well received.

After the talk I received a nice gift from the EuroBSDcon organizers: a cartoonist made drawings from the presenters during the talks! 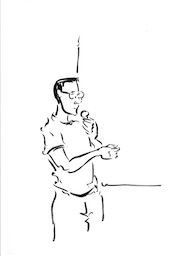 Remi provided the slides for his talk.

Thanks for writing in, Remi!