Contributed by weerd on 2008-06-17 from the redundant-department-of-redundancy dept.

It's been some weeks since the Networking hackathon, n2k8 in Japan, of which we've seen lots of great coverage already. One of the less obvious changes from n2k8 was that work was started on a very cool new feature for pf(4) and relayd(8), namely Direct Server Return (DSR). During the General Hackathon, c2k8, in Edmonton a lot of work was done on DSR which means that OpenBSD load balancers can now be used in this specific setup too (of course, with both IPv4 and IPv6 support).

Below we'll look at what DSR is in a bit more detail, ask one of the main developers some questions about it and configure a simple setup that does DSR for IPv4 and IPv6.

Load balancing is often used to distribute load over multiple resources (cpu, ram, disk, network, etc.) and to gain increased reliability because of the redundancy introduced with multiple servers (which also simplifies the process of upgrades). In most cases the service is handled by a Virtual IP (VIP) on a load balancer which then NATs requests to backend servers. The replies travel from the server, via the load balancer, back to the client. However, quite often there is substantially more return traffic than incoming requests. When serving large files over HTTP, it is not uncommon to see 10 Mbit or less of incoming queries for 100Mbit of return traffic.

Since all return traffic has to flow through the load balancer, it soon becomes the bottleneck of your load balanced cluster. Enter DSR. With DSR, the server replies to the client by itself (hence the term "Direct Server Return"), so that the load balancer does not have to forward all traffic back to the client. The following image illustrates the difference between NAT and DSR based load balancing : 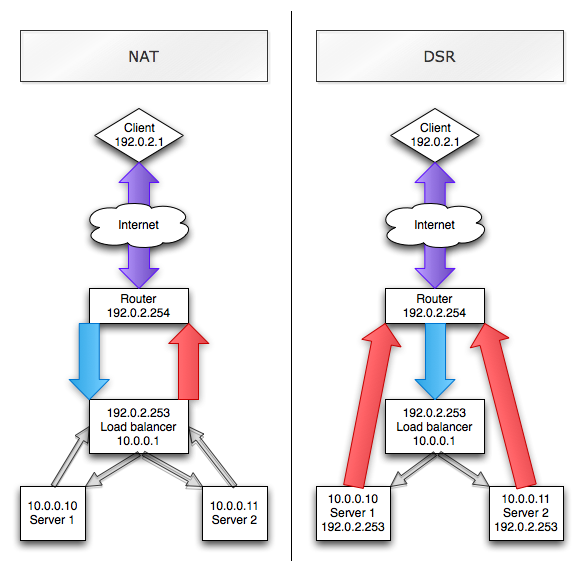 As you can imagine, full DSR support requires quite a bit of work. Reyk Flöter (reyk@) added the initial bits of DSR support to relayd(8) during n2k8. Reyk, in the commit message, mentions that this change was thought about in the onsen :

As you can see, in the case of DSR and pf(4), pf on the load balancer only sees one half of the TCP session (more on this later), so it is impossible to enforce some of the strict requirements currently provided by state checking. What is needed, is some way for pf to track a TCP state with less information :

Of course, sloppy state tracking can be used for other (assymmetric) situations too, but it is definitely required for DSR situations. Note that sloppy states are more easily attacked (read pf.conf(5) for more details), so you'll need to make sure traffic is sane elsewhere.

With the developers currently heading back home from an intense week of hacking, we now have a fully working DSR implementation in the base OpenBSD install. I asked Reyk about how he got to work on DSR and on any plans for future development. Reyk answers while waiting for his flight back to Germany :

weerd: When and why did you start work on DSR ?

reyk: Pyr@ [Pierre-Yves Ritschard] and me were thinking about implementing DSR for some time. It was somewhere on our TODO list but with a fairly low priority. We had crazy ideas to implement it and all of them were just too complicated so we never started working on it. But a few days before the n2k8 hackathon in Japan, which I really enjoyed, I had the idea to just use pf(4) route-to. Isn't it obvious? So I started doing some initial tests to verify that it works just before n2k8 and implemented it for relayd during the network hackathon.

weerd: So far, we've seen changes to pf and relayd. What other parts (if any) of the system did you have to change for DSR support ?

reyk: DSR is complete, it does not need any other changes than the ones that I've done for relayd and finally the "sloppy" state tracking in pf. From a network administrator perspective, you have to update your pf.conf to include an additional anchor to allow to insert the route-to filter rules, so add 'anchor "relayd/*"' in the filter section in addition to the 'rdr-anchor "relayd/*"' for translation rules. The configuration in relayd.conf is quite simple and it normally also requires to bind the relay's external IP address to a loopback device on each loadbalanced host.

weerd: So DSR is completely finished, nothing else needs to be done ?

reyk: Some testing needs to be done, of course. I will do some stress testing when I finally returned to Germany and hook it up to a 10G ProCurve switch and some fast machines. But it is much better if I get good feedback from the OpenBSD community about using DSR in different and maybe exotic setups. Does it work for you? Maybe I need to improve the documentation to give some better examples about how to configure DSR on the relayd box and the load balanced hosts.

weerd: Can you tell us something about the implementation details ?

reyk: During n2k8 I implemented DSR with a limitation that all sessions had a fixed and absolute timeout, 10 minutes by default. The sessions couldn't run longer than this and they did not time out before, because I basically had to bump up the tcp.opening timeout. pf's sophisticated stateful filtering does not allow to handle DSR TCP connections where you only see the requesting half of the stream, but I do need to keep a state to remember the target host from the pool of load balanced hosts.

I talked to henning@ [Henning Brauer] about a way to add an optional mode to pf(4) where it does a loose state handling. A mode that is enough to create and track a pf TCP state, recognize RSTs and FINs, and that works with half streams and async routing. Something that is horribly insecure and should never be used on real firewalls and if you don't know what you're doing. We initially didn't find a name for it so we talked about "loose state", "contrack", "iptables/netfilter mode", and finally "keep state (sloppy)".

Henning finished sloppy mode during c2k8 and I was able to update relayd to use this mode instead of the workaround with a fixed timeout that I used before. I did cosmetic adjustments to pf's sloppy state handling to detect half TCP connections on the fly - I made it even sloppier to work with DSR.

weerd: What are future plans for DSR and / or relayd ?

reyk: The future is already here - I implemented another nice thing in relayd during c2k8 that uses markus@' BINDANY and divert-reply extensions to allow fully-transparent relay sessions. It allows to run layer 7 relays to connect to the target host with the original client's IP address from the other side, it kind of obsoletes the need for X-Forwarded-For HTTP headers in some scenarios and allows fancy things like fully-transparent SSL encapsulation. But this is another story...

weerd: Any finishing comments on DSR ?

reyk: Don't use it. It is something that is required to handle really high amounts of bandwidth, like streams, but it totally negates the security benefits of real load balancing with pf redirections and the extra security in our packet filter. So unless you really need it, you should get a faster box and run the traditional mode instead.

There is nothing comparable to the stateful filtering in pf, just the buzzword "SPI" (stateful packet inspection) doesn't say anything about the quality of the checks. The new sloppy mode is so scary and useable at the same time, but it is even worse that other firewalls can't do much more than our sloppy mode.

weerd: Thank you Reyk for your time in answering these questions and your work on OpenBSD in general and DSR in particular.

Let's have a look at how to configure DSR with OpenBSD. We'll create the situation depicted in the image above, all systems will be running OpenBSD (router, load balancer and servers). We'll configure our service on both IPv4 and IPv6 of course. In this setup I'm using a set of ALIX 2c3 machines which have vr(4) interfaces.

Of course, this setup focusses mainly on DSR, but note that all components (including the router and the load balancer) can be made redundant using carp and pfsync, creating a completely redundant environment for serving just about anything you want. Also note that this is a very basic setup to demo the feature, there's no filtering at all. Please heed Reyk's warning and do not use this in production unless you really need to. That being said, if you do have a use for this sort of setup, please give the latest snapshot a spin and report success or failure back to the developers.

This is a very elegant solution adding to the growing list of cool features found in relayd and pf (and OpenBSD in general). Thanks again to Reyk and also to Henning and Pierre-Yves and the other developers involved.